Shape your silhouette effectively and effortlessly

Injection lipolysis is a professional aesthetic medicine treatment that enables an effective fat tissue reduction. This treatment allows silhouette modelling in its most problematic areas that resist slimming diet or exercise. In addition, injection lipolysis can be used for the reduction of double chin resulting from the deposition of fatty deposits as well as the so-called “hamsters” and fat pads forming under-eye bags reduction.

Aqualix injection lipolysis is a great alternative to invasive liposuction procedures. It is a quick and minimally invasive slimming treatment, which is distinguished by its high effectiveness and long-lasting effect. No-surgery lipolysis enables fat tissue reduction in any area of ​​the body, also in the difficult areas. Injection lipolysis can therefore be performed in the abdomen, buttocks, ‘riding britches’, but also arms, knees or face. It is worth noting that the lipolysis treatment works best for slim people with small deposits of body fat in a given area of ​​the body.

The course of lipolysis treatment

The treatment involves the injection of a phosphatidylcholine solution, which has a lipolytic effect. Phosphatidylcholine is a completely safe substance that leads to the dissolution of stored fat in cells. Released fat particles are then removed via the lymphatic vessels that go to the liver and are then removed from the body. Another effect of the treatment is stimulation of microcirculation, and therefore better nutrition and oxygenation of the tissue. The skin gains its firmness and elasticity.

Aqualix injection lipolysis is ​​a procedure that does not require special preparation; the whole procedure takes a dozen or so – several dozen minutes. An anaesthetic can be applied locally before the treatment, so the patient does not feel pain. After the injection, redness and swelling appear, which disappear spontaneously after a few days. The area undergoing treatment may be tenderer, and skin itching is also possible. Post-treatment recommendations are reduced to avoiding sun exposure and massage in the first few days after the procedure. It is advisable to perform endermologic and lymphatic massage treatments, which facilitates the removal of fat. It is also worth to ensure optimal hydration of the body, drinking at least two litres of liquids a day.

When injection lipolysis effects are noticeable?

The first noticeable effect occurs after a few days when the process of removing fat from fat cells begins. The final effect is evident after a few weeks from the injection lipolysis treatment performance. The effects are spectacular after a series of several treatments, performed at an interval of 3 – 4 weeks. A series of treatments enables the reduction of up to several cm in the circumference of the lipolysis site. As a supplement to the therapy we recommend the use of Lipomassage LPG Alliance, which accelerates fat removal from the cells and facilitates its transport through the lymphatic vessels.

Aqualix injection lipolysis is a safe procedure; side effects are extremely rare.

Injection lipolysis is recommended for slimming and modelling of such body parts as: 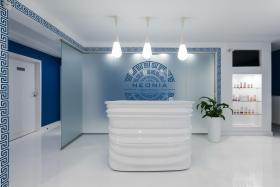